My trek from geeky highschool student to Associate Director at the Center for Teaching Development at the University of California, San Diego has definitely followed the alternative academic career path. 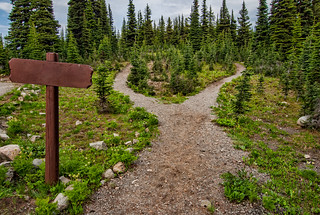 When I finished my Ph.D. at the University of British Columbia in Vancouver, I jumped off the tenure track to teach math at a 2-year college in Vancouver.  A few years later, I stepped halfway back into the Ivory Towers when I split my time between teaching introductory astronomy (#astro101) in the Department of Physics and Astronomy at UBC and being the resident astronomer at the H.R. MacMillan Space Centre (aka, the Planetarium) in Vancouver. I eventually ended up full-time in Physics and Astronomy at UBC, not on the tenure track but as a Science Teaching and Learning Fellow in the Carl Wieman Science Education Initiative. (Is there an adverb-form for gobsmacked or mind-blown? Oh well…) Gobsmackedly, I was in the office across the hall from where I’d first met my M.Sc. supervisor, Bill Unruh, some 18 years earlier. Now, I’m a faculty member in the Center for Teaching Development at UCSD, with the rank of Academic Coordinator.

And because of that, I have one regret (one is enough for this post): I’ve never felt the satisfaction and pride of having a graduate student. Because that’s what professors do, to move their disciplines forward. It’s their shoulders that the grad students stand upon to see further. When I hear from colleagues about the success of their students, I feel a wave of regret.

This summer that wave  was reduced to a twinge.

Part of my job at UCSD is to teach a class called The College Classroom about teaching and learning to graduate students and postdocs. Some of the graduate students become Summer Graduate Teaching Scholars (SGTSs) and teach a course in the Summer session. As part of our ongoing support, I observe each SGTS’s class 2 weeks into the 5-week marathon and give them some formative feedback.

And it was there, sitting in the back of those classes, that my wave of regret was reduced to a twinge. This summer, I witnessed first-time-ever instructors

Sometimes I sat there thinking, “Seriously? How did she know to do that? Awe. Some.”

And, so, what about my circuitous trek through higher ed? No regrets.

If you find yourself on a alternative academic path or you’re approaching the fork between tenure-track and not tenure-track, get on Twitter and follow the #altac hashtag. There are many others like you struggling with the same decisions you’re making.

First, a big thanks to Science Borealis for highlighting my blog as today’s #cdnsciblog. I’m flattered to be in their company and happy to contribute.

I write mostly about teaching and learning science at the university level. This blog started as a way for me to archive interesting things I’d seen or done while working in the Carl Wieman Science Education Initiative at UBC. It was for me, so I wouldn’t have to rely on my fading memory and chicken-scratch notes. Then other people started reading it, and leaving comments. Wow! There’s a community out there!

I’m hoping to combine my passions for science education and science communication at the next Science Online Together meeting, February 26 – March 1, 2014 in in Raleigh, NC. If everything goes as planned (c’mon, program committee, you really like my proposal, right?) I’ll meet you there!

Thanks for dropping in. And again, to the Science Borealis team for igniting this community.

Here’s a graph showing some guy’s position as he’s out for a walk:

Take a moment and describe in your own words what he’s doing. If you said, “He went up a hill and down again,” I’m sorry, you’re incorrect. But don’t feel bad – that’s a common answer when you ask this kind of question in a first-year physics class.

Andrew Elby calls it WYSIWYG graph interpretation. Robert Beichner investigates these particular “kinematic graphs” that show distance, velocity and acceleration versus time while this terrific paper by Priti Shah and James Hoeffner reviews this graph-as-cartoon misconception and many others, with implications for instruction.

Almost every instructor in a science, technology, engineering or math (STEM) field,  and many in the Humanities, too, lament their students’ inability to “use graphs”. I sympathize with them. But also with their students: graph interpretation is one of those areas, I believe, where expert-blindness, also called unconscious competence by Sprague and Stewart (2000), is most visible: experts don’t even realize what they’re doing anymore. By the time they’re  standing at the front of the classroom, instructors may have looked at hundreds, even thousands, of graphs. We look at a graph and BAM! we see it’s key idea. I don’t even know how I know. I just…do.

Well, because of the line of work I’m in, I’m forcing myself to slow down and try to reconstruct what’s going on in my head. Task analysis, they call it. When did I read the axis labels? When did I notice their range and scaling? Was that before or after I’d read the title and (especially in a journal) the caption? When you finally get to looking at the data, how do you recognize the key feature – an outlier, the slope of the line, the difference between 2 bars of a histogram – that support the claim?

The ease with which we interpret graphs makes it difficult for us to teach it:

What do you mean it’s a guy going up a hill and down again?! Obviously he’s standing still for the first second – slope equals zero! D’uh!

I’ve been wrestling with this problem for a while. Every time it comes up, like it did this week, I dig out a piece I wrote in 2010 when I was part of the Carl Wieman Science Education Initiative (CWSEI) at the University of British Columbia. It was for an internal website so the version reproduced has been updated and some names have been removed.

The skill of interpreting graphs came up a number of times. On the last day of the meeting, a group of us sat down to think about what it means to use a graph. One of us brought up the “up a hill and down again” interpretation of graphs in physics. An oceanographer in the group said she’d like to be able to give her students a complex graph  like this one and ask them to tell her what’s going on:

(Psst – how long did it take you to spot the 100,000-year cycle in the C02 levels? Not very long? How did you do that?) After thinking about the skills we ask our students for, a colleague sketched out a brilliant flow chart that eventually evolved into this concept map about graphing:

Students should be able to use words and stories, mathematical models and equations, and numbers/data to create a graph. All of this information should be used to select the graph type – time series, histogram, scatter plot, y vs x, etc. – based on what we want to use the graph for, the type of data and what best tells the story we want to tell. Once selected, a useful graph should have

The paper by Priti Shah and James Hoeffner reviews research into what people see when they look at a graph. It provides evidence for what does (and doesn’t) work. For example, if a graph shows the amount of some quantity, the amount should be the vertical axis because people see that as the height of the stack. On the other hand, if the graph is about distance traveled, distance should be the horizontal axis because that’s how people travel. One of my favourite snippets from Shah and Hoeffner: “When two discrete data points are plotted in a line graph, viewers sometimes describe the data as continuous. For example, a graph reader may interpret a line that connects two data points representing male and female height as saying, ‘The more male a person is, the taller he/she is’.” (p. 52) Their finding, as they say, have “implications for instruction.”

More often in our Science classes, we give students a graph and ask them to interpret it. This is a critical step in figuring out and describing the underlying (that is, responsible) process. Just what is it we want students to do with a graph?

describe Describe in words what the graph is showing:

Given two distance vs time graphs, which person is walking faster?

What is happening here?

How have the CO2 levels changed over the last 400 000 years? [And we’ll save “why has it been doing that?” for the next question.]

interpolate and predict Use the mathematical model or equation to extract values not explicitly in the data:

Give the graph of a linear function and ask for the expected value of another (the next) measurement.

Give the graph, ask for the function y=f(x)

Find the slope of the graph

read off data Extract numbers already present in the data:

What is the value of y for a given x?

In what years did the CO2 levels reach 280 ppmv?

When is the man farthest from the starting point?

I’m always looking to collect examples of graphs—the ones students in your discipline have trouble with. It’s very likely we’re having similar issues. Perhaps these issues could someday be addressed with a graphing concept inventory test that expand’s on Beichner’s Test of Understanding Graphs in Kinematics (TUG-K).

[Update: Just prior to publishing this piece, I looked more closely at the “guy out for a walk” graph. He travels 40 m in 2 seconds – that’s 20 metres per second or 20 x 3600 = 72 000 m per hour. Seventy-two km/h? He’s definitely not walking. Perhaps I should have said, “Here’s a graph showing some guy out for a drive.” I’ll stick with the original, though. Yeah, maybe I did it on purpose, just to make you put up your hand and explain your answer…]

Getting the most out of peer instruction

Teaching from a place of respect, equity, and compassion